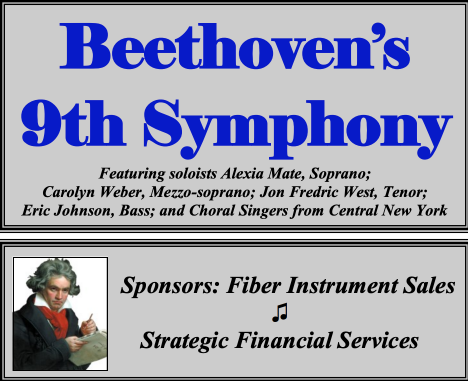 We are extremely pleased to present the Symphony’s third concert: Beethoven’s Ninth Symphony featuring Alexia Mate, Carolyn Weber, Jon Fredric West, Eric Johnson, and Choral Singers from the Central New York Region. The Symphony No. 9 in d minor, Op. 125 (also known as “the Choral”) is Ludwig van Beethoven’s final complete symphony.  The symphony is one of the best-known works in classical music. Among critics, it is almost universally considered one of Beethoven’s greatest works, and many consider it one of the greatest compositions in the western musical canon.