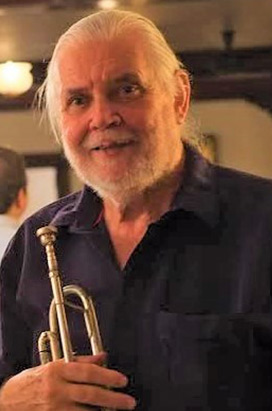 Carleton Clay began playing trumpet at the age of 11, composing at the age of 18and by age 25 he was teaching and producing concerts. He received his bachelor’s degrees in Music Theory and Music History from the University of Oklahoma, and his Masters in Musical Composition from Yale University. He is currently employed as Professor of Music emeritus at SUNY Oneonta (a 47-year career) and has taught at Colgate University and Hartwick College, as well. He is President and Music Director of Catskill Conservatory and is the Principal Trumpet with the Catskill Symphony and the Clinton Symphony orchestras. He is also a member of Alone Together: The Mollin-Clay Jazz Duo, with bassist Rich Mollin. Carleton is the founder of and trumpeter with the Catskill Brass Quintet. The most satisfying part of his career has been the friendships he’s made with fellow musicians whom he has invited to this area, starting with Chuck Schneider in 1973, and including more than two dozen other musicians. Each has brought his/her own perspectives, interests, and skills to bear, creating a snowball effect that has helped make Central NY one of the most vital non-urban musical centers in the country.