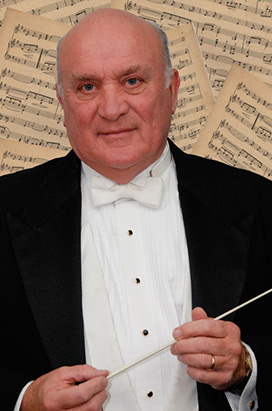 An award-winning and versatile musician, Maestro Schneider’s experience spans the musical spectrum – Broadway musical theatre, opera, pops and symphonic music. He conducted the 1967 CBS Television Special of the Year with Jimmy Durante, The Supremes, and Jimmy Dean. He was the Music Director of the off-Broadway hit “Your Own Thing” that won the 1968 New York Critics Award (first time ever for an off-Broadway show). He was the Music Director for Juliet Prowse, Dorothy Sarnoff and Broadway legend John Raitt.

A number of upstate New York performance organizations have benefited from Charles Schneider’s guidance and expertise: he has conducted the Catskill Symphony since 1973, was the Music Director of the Utica Symphony from 1980-2011, and of the Schenectady Symphony Orchestra since 1982. In addition, Mr. Schneider has served as Music Director of the Portland (Oregon) Chamber Orchestra. He was the founding music director of Glimmerglass Opera, a position he held for 12 years. He was also co-founder of the Catskill Conservatory of Music (Oneonta, NY). Additionally, he conducted the United States premiere of Bertold Brecht and Kurt Weill’s “The Rise and Fall of the City Mahagonny” with the San Francisco Opera.  Mr. Schneider has also conducted five orchestra tours throughout Europe with the Central New York Symphony Orchestra, with concerts in Prague, Brno, Bratislava, Vienna, Budapest, Krakow, Athens, Sparta,  Patras, Paris, Zurich, Lucerne, Geneva, Lyons, Bordeau, and Crete.

Maestro Schneider is a four-time recipient of the ASCAP Award for Creative Programming and Performance Excellence. A graduate of Cornell College of Iowa, Schneider studied piano at the Juilliard School of Music. His conducting career began on Broadway in the 1960s and included “West Side Story” at Lincoln Center. In the 1970s he moved into symphonic music as Associate Music Director of the Kansas City Philharmonic. He studied conducting with Igor Markevitch of the National Orchestra of Monte Carlo, with Herbert Blomstedt, formerly of the San Francisco Symphony and the Gewandhaus Orchestra in Leipzig, Germany, and with Franco Ferrara of the St. Cecilia Academy in Rome and Siena, Italy. He later was the assistant conductor for Blomstedt at the Aspen Music Festival.