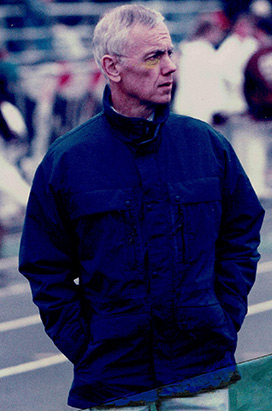 His interest in the vitality and sustenance of the Clinton Symphony is truly genuine.

Roger Moore was born in Pompey Hollow, near Cazenovia, on a farm. He graduated from Cazenovia Central School and Syracuse University in painting. (The urges to farm and paint were never very effectively suppressed.). He was drafted into the Korean Conflict, and upon returning, after two years of pre-med, went to medical school in Syracuse, followed by Family Practice training at St. Joseph’s in Syracuse.

He, Joanna, his wife of sixty years, moved to Clinton and practiced with fury for forty years. They have six children and ten grandchildren.

Music for the Moores was, and is, an ongoing passion. Roger has sung in his church choir for fifty-four years, missing only twice in that period of time. He sang eleven roles with the Utica Opera Guild a generation ago. His artistic production is notable (not that volume of works necessarily reflects quality of work, although in this instance he thinks it does: 600 oils, 2000 watercolors, multiple stained glass works…).

Roger’s youngest grandchild, as a school project, wrote a “biography” of his grandfather. He stressed the facts that he “plays the harmonica and raises big pumpkins.” That was all he mentioned.

Roger is a charter member of the American Board of Family Practice, former president of St. Elizabeth Hospital medical staff, winner of the Excelsior Award, board member and volunteer at Abraham House, chairman of the Hall of Distinction committee of the Clinton Central School Foundation, treasurer of Little Thinkers, Clinical Associate Professor of Family Practice at the Upstate Medical Center, and a member of the Clinton Athletic Hall of Fame.

His interest in the vitality and sustenance of the Clinton Symphony is truly genuine.